Something that I keep on talking about constantly with people is the wealth of talent that there is in Ireland with regards people making their own electronic music. Every week I seem to be discovering new tunes by some local producer and someone that I really feel proves this statement more than most is Aodhgán, or Puca as he’s also known. Having honed his craft from a young age, the Cork based Sligo producer has gone from strength to strength throughout the years , creating the kind of dark soundscape techno that wouldn’t sound out of place in The Berghain in Berlin at five in the morning.

While rooted in techno there’s so much more going on and having seen him live an absolute multitude of times, whether playing his own stuff or DJing, I’ve loved every second of it. I can’t speak highly enough of the guy and it’s with this latest mix that I feel he’s really outdone himself. I’ve been told that I tend to exaggerate but this is honestly, no exaggeration, personally one of the best live sets I’ve ever heard from an Irish producer. Both the production quality and tunes are top notch and it’s music that’s right up my alley. I’m both very privileged and grateful that he recorded it especially for the site and that he was up for an interview. So sit back, turn up your speakers and take it all in.

How did you start off with an interest in and making electronic music?

I was pretty much weaned on house around my family growing up. My godfather taught me to beat match when I was about 10, and I got addicted… So I suppose that started the interest. Got my first pair of crappy belt drives with my confirmation money! It just grew from there really, I got a copy of Mod plug at the age of about 13 on floppy disc from one of the older lads at school (thanks again
Peter!), and that was the can of worms.

You grew up in Sligo before relocating to Cork for college. How’s the music scene up there?

I haven’t really been back to Sligo much in the last few few years. Going back it was mostly house. When I was there there wasn’t much of a scene for producers, it was all very D.I.Y, making music in the bedroom and playing tunes at home. There’s some great bands like The Oddsocks Revival and Túcan. Also, there is a brilliant hip hop night called This side up.

How would you describe your sound for someone who hasn’t heard you?

Well Ken, tough question, I’m not really one for sub genres but I’d like to say somewhere between Psy-discore-tech and extra funky loungecore nu-wave sean nós techno…!! Don’t really know myself!! You’d have to take a listen really, I don’t set out to make a particular style, I just make electronic music usually with a healthy dose of 4/4!

How does the tune making process work?

I try to approach every track differently, but usually start out with a field recording or a weird sound or drum loop from Pd, or a circuit bent toy or something and then bring it into ableton and start to twist it into a groove of some sort. Then build on it from there. I run some elements back out through speakers messing around with them in different ways to try and get some ‘analogue’ distortion or harmonics. For example I have the inside of and old upright piano that was retrieved from a skip. It’s warped from lying out in a garden, but it works as a kind of resonance chamber when you send stuff through it.

What producers are invading your brain at the moment?

I’d have to say Alva Noto, his set at BLOC this year was a game changer for me. His productions and collaborations go right from really mellow to absolutely insane. Also Max Cooper, Kangding Ray, Murcof and Byetone. I’ve been listening to a lot of Blockhead recently as-well.

You also recently collaborated with Toby Kaar doing video work. How did this differ from your straight live music performances?

It was much tougher in a straight up logistical sense, as I was doing sound and video live so it was tough to do so many things at once, as I’m sure my laptop would agree… Toby is living in England so we had to back and forth things over the internet before doing it which left for a lot of improvisation on the night which was great fun. I think our sounds work well together. I had worked with Toby before, as part of the half and half exhibition but Toby was in absentia and I wasn’t doing the video live so playing a piece with him, being aware of someone else, being aware of matching colours with sound ‘colours’ and playing with rises and falls and playing with alternating them between the two, was a lot of fun. I really enjoyed it, both the collaboration and the live video are something I’d like to do more of in the future.

Who would be your dream collaborator?

I recently did something with Robin Renwick and Caleb (Coherx) as part of Robin’s masters. The three of us jammed, in the same room but over the internet with a max patch that Robin wrote. It was something new that only happens when you approach something differently. I really enjoyed it and I think we all got something out of it. Which is what I’d be hoping for in any future collaborations.

What pieces of production gear couldn’t you live without?

I think getting a decent pair of monitors and headphones was the best thing I ever did…. Hearing what your doing on something flat is invaluable. Obviously, as an electronic producer I wouldn’t get very far without my laptop and Ableton. The trusty old m-audio ozone isalways in use from the start to playing live as-well.

As a DJ what records always work a room?

I don’t think there’s a tune for every occasion, unless your playing it safe. I usually just have a rough idea of how I’m going to build a set. I love everything I play and I think when someone is passionate about what they are playing out its contagious. Hopefully people get into it, you just have fun with it then.

Have you any upcoming releases planned?

I’m constantly working on new material, there might be something in the pipeline but until anything solidifies I’m going to just keep writing and playing as much as possible.

”Tis a live set of all new material, some of which I have played live recently, some is fresh out the box for Skirmish Blog readers! Thanks a million for having me…. You’ve put me on to loads of great music on here, chuffed to be on it!”

Big up to Aodhgán (Púca) for the interview. Sound out.

You can check him out in Bourbon Street in Cork with Vaetxh this Friday night. Click poster for more information. 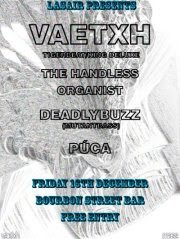 Dugdale is the moniker of friend and personal hero Dan Sykes. His dedication to the Irish music scene …

The electronic scene in Ireland is an unbelievably healthy state. There are a number of excellent dj’s from …