Cian Ó Ciobháin’s radio show, An Taobh Tuathail, has been a beacon for leftfield music in Ireland since it’s inception. Having earned himself a cult following both here and abroad, you could say the show has become an institution of sorts. Recently tagged as ‘the Irish John Peel’, Cian has been on air for an honorable thirteen years now. Broadcasting on Radió na Gaeltachta five nights a week, he plays some of the best alternative and electronic music from all over the world. Varying in theme each night, you’ll hear a diverse range of genres from dreamy electro-pop to dub-step and techno, depending on what night you tune in. One thing is for sure though, you can expect to hear something totally different, of a reliably high quality and brand spanking new, all as Gaeilge.

Beginning his career by hosting Ireland’s first and only, music tv series devoted entirely to electronic music, Rianta, he made his mark on the Irish broadcasting scene early on. Since then, together with Cyril Briscoe, he has been running one of Galway’s finest clubnights 110th St and they can also be heard playing sets around the country under the name SiSi.

On the cusp of releasing his fifth compilation album from the show, An Taobh Tuathail Vol 5, (which will be available to download on August 13th)Cian took the time to answer a few questions for us…

What are your earliest musical memories and what inspired you to get into music broadcasting?

I recall being bewitched as a youngster in my parents’ kitchen in west Kerry listening to the radio … everything from John Barry soundtracks to Abba and the old beautiful songs of the region. I have a particular memory of two young lads visting from Limerick – two sons of my mother’s friend – and they sang Rolf Harris’ ‘Two Little Boys’. I had never heard it before. I burst into tears – with the benefit of hindsight, that’s when I first realised the prodigious power of music to tug at the heartstrings.

Regarding broadcasting music, I can safely say that it is my raison d’etre. I’ve always enjoyed (a) searching for music that I have never heard before and (b) needing to share my new finds with people. Once upon a time, I’d compile cassettes to share with my friends. I realise that there are effective ways of sharing music online these days but – short of inviting you to my house – I find that the radio is the nicest way I can think of to share the music I love with the people who care. I was compiling radio shows in my head a very long time before I actually got to sit in front of the mic – which was in NUIG in he 90s on Flirt FM, the college radio station.

Is it significant – to you personally- that you present the show in Irish, or would you be as happy to work in English?

It’s a source of considerable joy that I can present the tunes that find their way to me to others in our beautiful, ancient tongue. Some nights, it crosses my mind that I might be using the same words to describe a techno record from Berlin that have been passed down through generations by writers, poets and kings of Ireland. I realise that I would have a greater audience if the show were in English but regarding the universe through Irish is as much part of my identity as is my love for music.

ATT has gained a quite reputation for the high standard of music played out. It’s thirteen years old now, and as each year passes there’s more and more musicians & producers: With the internet, cheaper equipment, etc. Is your job getting more difficult? Surely it must take far more time… Is it hard to find the quality stuff and keep the standard at that high level?

That’s a very good question and in many ways you’ve answered it. There’s a never ending tide of MP3s landing on my hard drive from around the world every day. I reckon I get sent about 500 new tracks through the internet every week. Of course, it involves much endeavor to listen to them all – I’m doing well if I can get through 50% of the stuff. I lead a relatively monastic existence during the week, rising early to spend the day listening to music. I’m not complaining, on any given day, I might hear at least one exceptional tune that I’ve never heard before – it’s such a great feeling to welcome a new tune into your life that you wonder how you ever managed to survive without it. Of course, most of what I listen to doesn’t make the cut for the show. However, the digital age has made it easier than ever to find the good stuff – through filters such as trusted blogs, social network sites and good old recommendations from friends of the show.
In your opinion, with the internet the way it is – downloading & radio streaming – what does the future hold for radio? Do you think it is under a serious threat, and if so, is there any way of avoiding it?

I don’t think radio as a medium will ever die. As long as people are active with their hands or feet – cooking, typing, jogging or driving – there will be a need for a friend to talk to them and it’s hard to beat the radio. The internet has provided an invaluable way of sending the show around the world – we have listeners in New Zealand, Korea, across the States, Europe and the UK who tune in on the web or through the RTE radio player. I have every faith that radio will exist as a viable, powerful medium as long as people exist on this planet.

You’re a broadcaster, DJ & promoter: Which is your favourite?

While I stress that broadcasting is my life, I absolutely adore DJing. When all the stars are aligned – a sweaty, enthusiastic dancefloor grooving to a dynamic mix I’ve managed to fluke, there’s nowhere else I’d rather be. All night long.

Your choice of the top 3 Irish acts to keep an eye on..

It’s hard to pick three. For dancing – try Tr One, John Daly, Ships, I Am The Cosmos, FishGoDeep & New Jackson. I love Donegal’s SlowPlaceLikeHome’s psychedelic electronica, there’s a track of his on the upcoming ATT Vol 5 podcast. From Mayo, I recommend Seamus O Muineachain and Seamus Forgarty. And what about the wonderful spectral folk music being regularly released by Galway’s Rusted Rail label?

If you weren’t working in the music business, what would you be doing?

Going from door to door to convert the superstitious of mind to atheism and reason.

You’re on a desert island and you have a record player (with electricity!). What three records would you have with you?

lest I forgot the grey, desolate skies of northern Europe; Cocteau Twins ‘Heaven Or Las Vegas’:
and My Bloody Valentine’s ‘Loveless’ because they feel like part of my DNA:

Judging by previous compilation releases, and by the eclectic track-list, An Taobh Tuathail Vol 5 is going to be an absolute gem of an album and will be available for free download here on August 13th. You couldn’t ask for more really could you?

And if you haven’t already heard the show, listen in (Mon – Fri, 9-11pm ) and I can guarantee you’ll hear at least 1 tune you’ll go on the hunt for.

Big thanks to Cian for the interview! 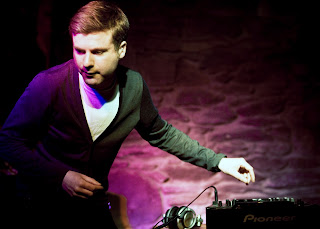 Continuing our preview of Bloc 2012, up this week is an interview with Bristolian Addison Groove , who …

Bastardo Electrico main man, promoter, producer and of course DJ Jamie Behan, has been kind enough to give us …

What Next: The Pav Closes

You read correctly – The Pav has closed in Cork! With a number of venues closed in the …