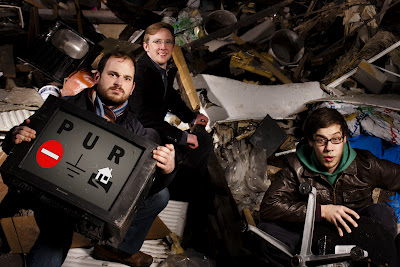 Comprising of Paul McNamara, Kevin Blake and John Machale, Private Underground Residence hail from Limerick and Cork respectively. As they say themselves, when it comes to genres they refuse ‘to put their music in a hole with pigeons,’ and they’re not lying. Falling somewhere within the realms of experimental and post rock, yet using & giving much more than those labels tend to offer. Meaningful lyrics supported by prog like build-ups, head-banging crescendos, ridiculously tight rhythms that build and dissipate seamlessly, sullen breaks with melodies lurking & ready to emerge at any moment. Each track mediating a particular message; if you’re looking for substance, you’ll find it and layers of the stuff.

The best part of PUR is their gigs. It’s a bombardment of the senses. They get right into it and let go so much sometimes I wonder how they even stay on stage. Before you know it you’re a component of the madness and a part of the perpetual energy that sets in place. I dunno if you’d liken it to Newton’s Third Law of Motion or what!

With their debut album Dynamics of Idealism, about to drop over the coming months and two wicked tracks up on Soundcloud as a taster, the lads are going on a cross country mini-tour this weekend. Starting in Whelan’s, Dublin and then making their way down the M8 to their old playground Cork, where they’ll rock the Triskel tomorrow night. Ahead of their busy weekend we are delighted that Kevin took the time to answer some questions for us, on behalf of the band…

Let’s get all the clichéd, but necessary questions out of the way in one:
Tell us how you guys got together, about the early days, your influences and indeed, plans for the future….

I went to school with Maca. We were always in different bands but part of the same scene; a very vibrant rock music scene in Limerick that emanated from a collective called The AMC. They used to put on touring bands in Limerick once or twice a week for many years. The highlight was getting to see Fugazi play at one of their final gigs. We aspired towards all that DIY attitude, and we still do ten years later. Long story short – we suddenly found ourselves living in Cork in college and band-less. We started bouncing riffs off eachother to combat musical loneliness. Maca said I know a guy who plays drums in my course. Enter John. Everything clicked. The rest is history. Future plans? Keep doing what we love to
do. Making music and playing shows.

PUR consists of the traditional instruments of a band but also hardware/synths. What kind of gear do you use?

I’d like to think we’re not that traditional in the sense that we don’t have a bass
player, both live and on our recordings. We’ve never felt the urge to get one
either. We’ve been working towards building up giant guitar stacks with old
school valve heads to get a nice warm and big sound, and we use various pedals
and effects bridge it all together. The album we have just finished is mostly guitar based, but in the future we have no doubt that we’ll be getting a lot more electronic instruments involved in both the live set and recordings.
Your music is hard to categorize in that in doesn’t strictly stick to any specific genre, instead it touches off & bends elements of several genres. Is this this just how it ended up or was it intentional?
It’s pretty much always how it ends up. Someone comes up with a riff and we jam it out and develop it. We don’t set out to make anything from any particular genre. If it sounds good and feels right it usually becomes a song.
By not sticking to the mold, in a way, your music gives mainstream music & its conventions the proverbial finger! Would this qualify as an ethos/definition of the band if it had one?
Mainstream music is indeed a concern amongst us all who antagonise against it. However, it is just a microcosm of a much greater problem that we’re trying to address. We’d like to see a more equal world that is no longer shaped by ego, racism or greed.

Your lyrics seems to have an underlying or deeper meaning, like in Snuff Box, ‘gravity will not be beaten.’ Is it important for you to have thought provoking lyrics?

I guess we can be fairly heavy, and the meek could sometimes find us intense. However, this is a true emotion within us that we use the stage as a vehicle for exuding. For the most part though, we’re there to have fun. Playing live is what we love to do. We have some new stuff that we can’t wait to try out, so I guess ye’ll just have to come and see!

If you’re in or around either Dublin tonight or Cork tomorrow, do yourself a favour and go to see PUR. You won’t be disappointed. With quality support offered by:

First coming across Nouveaunoise back in 2010 at the venerable, Electric Underground clubnight, little did I know that …

Where to start with Plaid. Since their humble beginnings in London at the turn of the eighties …