There are certain local producers that come along that make you stand up and really take notice. I think the Irish scene in general is awash with immense talent and Roam most definitely fits into this category. Born in Limerick but based in Cork, his first gig was at Set in Stone in Clare and being the first act of the day on at 3 o clock he set the bar for the rest of the two days . Fuzing elements of jazz, hip hop, Drum and Bass, I.D.M. and everything in between, his music has this great sense of hopefulness in it and every beat and synth line is well thought out with each element as important as the next. It’s hard to believe it was all recorded in his bedroom. It’s music that beams intelligence and raw talent. At the young age of 22 as well, it’s a sound that’s far developed beyond his years and as he gets older it’ll be very exciting to hear how much more he will have progressed. I am absolutely delighted that he agreed to do an interview and make an exclusive mix for the blog as well. Every second of music on it is brilliant and I cannot big up his stuff enough. My particular favourite on the mix is Fog. So there you have it folks – I highly recommend turning your speakers up or putting your headphones on, chilling out and taking it all in and then pass it on to your friends/strangers/ whoever will listen and spread the word because this is only the beginning of more and more great music by him. To top it all off he’s an incredibly nice guy as well.

How did you get interested in making electronic music?

I first got into making electronic music when a friend threw me on a copy of Ableton Live on a USB by accident along with a heap of music and films and whatnot. Had heard bits and pieces about it so purely out of curiosity decided to give it a lash. To be honest I found it fairly mind-boggling at first but what kept me interested was seeing how the music i was listening to could be made through various techniques and tricks within Ableton. Understanding this allowed me to enjoy the music on a whole other level. When i first started making tunes myself i was trying to put my own twist on the same sounds that my favourite producers were doing but eventually it unraveled into a serious hobby that has given me endless enjoyment since.

Is it a fairly new development or have you been working away on it for years?

First got into it around April of last year, been completely addicted since! Cant see myself stopping any time soon either. 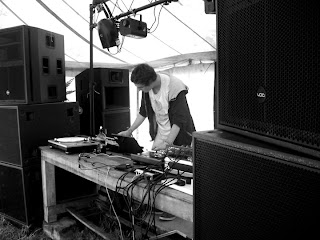 Do you find that being a musician helps when making tunes?

I play guitar mainly and have done music as a subject in school but to be honest I find relying on theory to make a tune usually sucks the fun and originality out of it. I suppose i never fully grasped the theory side of things but after getting a midi keyboard it definitely does draw a clearer picture of what notes and chords sound better with each other. I usually find it best to just feck around aimlessly with the keyboard or guitar until something nice comes out!maddening stuff sometimes though…

You’re about to play your third gig on the 26th August. How do you find relating your music in a live setting?

To be honest i find playing live to be a bit of a challenge – i havent really found a way to go about it yet where im comfortable. Its literally a case of either doing practically nothing on stage and the whole thing being pointless, or instead a situation where there’s too much to do at once and im pointlessly stressing trying to recreate the same structure to a song that i made out originally, while trying to still add my own input – whether it be through Ableton or on the keyboard. So yeah, its hard to find an ideal middle ground where i could just jam away and make up something new out of something old every time….i think maybe it might be a matter of having the right hardware. Hopefully all will become clear in time anyway!

What’s influencing you at the moment?

At the moment my main influences would probably be IDM/electronica stuff such as Mount Kimbie, Eskmo, Wisp, Flashbulb, Flying Lotus and Four Tet as well as other stuff like Bonobo, Will Holland (Quantic) and Nightmares on Wax. Overall though i’d say progressive rock like Yes, Camel and King Crimson are probably the closest to my heart and have had the most lasting effect on me musically.

What are the plans for the future?

I definitely intend on leaning more towards recording live instruments whenever i get the chance anyway, for one thing. Also, If all goes well going to do a music technology course next year and gonna try spend more time making tunes. Looking forward to finding out how sound works and having access to a huge studio with crazy instruments – wahey! After that who knows, im definitely emigrating anyway.Time to leave i think…

What are your three favourite songs ever?

Really tough one…i literally have a list three or four pages long of my favourite songs!But if i had to choose id probably say

Theory of Machines by Ben Frost:

Close to the Edge by Yes:

Cheers for havin me anyway Ken, lovin the blog, its been an absolute pleasure!Also, thanks a billion to those who listen!

*Edit*
Unfortunately this mix has disappeared but find his addition to the Autnote series here.
1 Comment

Shambala is drawing ever closer and to say I’m excited is an understatement. Four days off from …

At the moment, Limerick city is an especially vibrant spot when it comes to electronic music. With …

Happy Friday everyone! Hope you’re enjoying it where ever you are! Really looking forward to getting the weekend …