With a name like Rrritalin you just know that his music is going to be interesting. Hailing from the London, Tim Howe, as he’s known to the bank, has started making a name for himself this year with his brand of frantic, bouncy, ravetastic tunes. I first heard him when he recorded his unbelieveable mix for the Z Shed crew. Since then he’s gone from strength to strength with apperances at Glade festival as well as releases on Coin Operated, Mutant Bass and upcoming release on Cock Rock Disco. He also finds time to be a part of the excellent Yardcore collective who have been tearing up dancefloors throughout the UK for the past couple of years. He’s definitely one of the most exciting producers around at the moment and I was delighted when he agreed to do an interview for the blog.

First off I suppose was how did you get interested in making electronic music? Are you one of those people like myself that was into metal and then went to the more electronic side of things or were you always into it?

Actually I’m one of the other lot. My first purchase was a Prodigy single as far as I recall, and at that time I’d never really tried making music at all. My early exposure to music was through my parents who listened pretty much exclusively to classical stuff, which I remember enjoying. When I went to school I encountered a bit of pop music (which I thought was the only other kind of music) and wasn’t really feeling it. I can’t remember which track I heard first, but I think it might have been ‘Break and Enter’, and it sounded so incredibly powerful and alien that I decided I had to learn to do that for myself.

As I got to know people in my local area (I was in rural Wiltshire at the time), I met other like minded people (eg. Bristol dubstep producer Phaeleh) who had begun in metal and moved across. What metal I know is as a result of them: I like the stuff with big pentatonic riffs in it, and Tool for their rhythmicity, but I’m certainly not a metaller!

You have a very hectic sound altogether. How would you describe it to someone who hasn’t heard you before? Have your studies in Neuroscience helped shape it?

Well we call it mutant bass, but it’s basically dirty, bouncy, no-rules rave music. I’m trying to make music that sounds the first time you ever came up, next to the rig in the middle of a rammed warehouse. That’s an ongoing project, I’m continuously in the process of how to do that. My main influence is definitely oldskool hardcore and jungle, styles defined by rapid switches and constant change.

I suppose the main influence of my neuroscience career is to provide me with a stable income. This lets me focus on learning to make great underground music, rather than simplifying my ideas to make them more universally palatable. With a few notable exceptions, as producers get better they often try to make the leap to making a living off it. This means either moving into commercially structured dance music, or more general listening stuff like the big Warp Records acts. Another thing it currently does is give me the urgent need to release occasionally, a la Jekyl and Hyde. This keeps me writing and playing rave nonsense rather than making more intellectually stimulating music. I’m done with thinking when I get home and fire up the sequencer! On the downside it limits my time drastically.

You’re touring with Kanji Kinetic and Submerse at the moment. How’s that going?

Well to be honest it’s yet to start seriously, I think it’s happening in the autumn sometime. I’m good mates with both of them though and the tour’s led to me getting signed to the same agency as them, Faze 2. They’re a good agency because they give you quite a bit of freedom as an artist unlike some agencies who can be extremely pushy. I’ve also been doing a number of back-to-back gigs with Kanji which has been great fun! 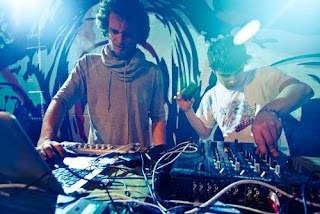 How does a vibe at a festival compare to the little dingy clubs?

Well it depends on the festival. At a big thing like Glade where Kanji and I played at peak time on a big stage, you certainly get a great buzz. On the flipside, it’s alot less intimate than some of the smaller gigs. Nobody likes playing to a tiny room full of bored people who don’t like your tunes, but the same room with even 40 or so nutters can be stratospherically hectic, and you’re right down in the action. I hate DJ booths that are several metres above the crowd. It creates altogether the wrong relationship with the crowd.

What producers/dj’s are you listening to right now?

In terms of the stuff that I play out, my big influences are Michael Forshaw, Kanji Kinetic, Squire of Gothos and Luke Vibert. Forshaw in particular is smacking it for me at the moment. A lot of his recent stuff has been checking for the classic darkcore rave sound and it’s absolutely filthy. He’s just done a remix for my next EP which is a bit of an ambition fulfilled! There’s some wicked new producers trying their hand at the mutant bass sound though. I’m particularly feeling Yeahhbuzz and Lenkemz at the moment.

In terms of other stuff, I feel like I should disclose a conflict of interest cos he’s a mate, but I can’t get enough of DJ Rum at the moment. Look out for Mountains EP it’s a killer. I also really like Phaleh, Boards of Canada, Loops Haunt and Bullion.

How do you go about getting a tune together? Are you more of a hardware or software man?

I’m pretty much exclusively software. I don’t have a specific way of beginning, but I find that tunes get off the ground once there’s a good drum track and a hooky sample. Bass is obviously very important, but I can’t tell a tune will be worth finishing until I find a good sample for it. I’ll often begin by trawling through acapellas or old rave tapes for something which gets my juices flowing. Once you’re excited, the rest will flow much more easily! I also have a rule that I try to make sure each track I do does something that sounds a bit new. This is very important for me because I make such obvious references to stuff that’s been done before, so I need to ensure I’m not just doing a pastiche of my favourite old rave tunes!

Your Z Shed mix has definitely been my favourite of the year. How do you approach getting a mix together?

Thanks! I tend to use doing a studio mix as an opportunity to test out new ideas. I spend a day or two mixing together nearly everything in my collection to see what goes well together and then try and make it progress in a sensible way. I try to choose tunes for their musical content rather than because they’re easy to mix with, and I get bored very easily so I tend to mix very quickly. Being an Ableton DJ means that I can just use single loops or clean sounds from a given tune, so I can mash it up more. Often once I’ve done a mix, the ideas I use in it will find their way into my live shows.

What are your plans for the future? I’m hoping yourself and the Yardcore crew will finally have world domination.

Well we’ve all been pretty fortunate with how things have turned out. Codeshift has started a wicked new DJ Agency, Methlab, which is looking after some amazing DJs, VJs and AV artists like Broken Note, Schemeboy and Stormfield. Mashforcash is moving to Berlin to work as a developer for Ableton Live (clever bugger!), and DJ Rum is putting out some killer vinyls and has an upcoming mix for Mary Anne Hobbs’ XfM show. I’m just about to start a well-funded neuroscience PhD at UCL and will be heading up a transgenic mentasm research and development group on behalf of the UK Darkcore Secretariat.

Any tips for aspiring producers out there?

It’s hard to give generic advice that will be applicable in each case. If you’re trying to make it your primary living, my advice would be to ask someone else. For those happy to spend some time in the underground with no Radio 1 exposure, girls or Hennessy, if you’d like a nice supplementary income while traveling all over the place and meeting some great people, my main suggestion is to throw caution to the wind. Send stuff to your favourite DJs and labels straight away even if you don’t reckon it’s good enough, because it just might be exactly what someone’s after and you’ll get some great feedback. Focus first on sounding interesting and exciting, rather than trying to get your breaks and bass as tight as Noisia. You’ll slow your development down so much that way. Once you’re getting paid for being a DJ you can justify getting wanky about your snare sound.

Depends. Are we talking jammy dodgers or high grade shit like Sainsburys Extremely Choclate Shortbread? On the other hand, Cake affects the part of the brain known as Shatner’s Bassoon (that’s the part that deals with time perception, according to Noel Edmunds). Got any Clarky Cat by the way?

Big thanks to Rrritalin for the interview!

You can check out his website here with information about upcoming gigs and releases.

Limerick has a fine history in Drum and Bass and Jungle. One of the finest labels in …