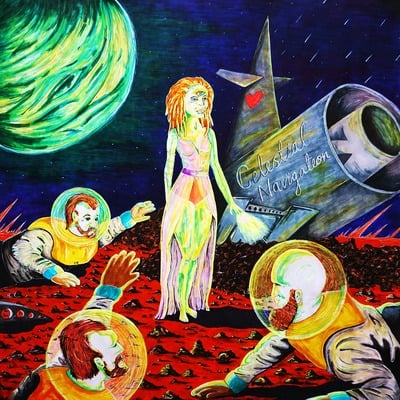 Admittedly the updates are few and far between on this site as real life means both myself and Shiv have less time to commit to the blog. However, sometimes a release comes out that I can’t stop listening to and  need to write about.

Given the back catalogues of each member, Celestial Navigation is an unexpected (but very welcome) diversion from their individual sounds. From the first synth line and 808 claps of opening track Double Moon, you’re instantly aware this is an 80’s vibe and I knew it was going to be right up my street.

It’s just an insanely fun record – you could easily hear so many of these tunes on City FM, the Grand Theft Auto radio station famed for playing 80s bangers, and is the perfect soundtrack to cruising around Vice City assaulting pedestrians and living your best life.

And while most definitely influenced by the 80’s, it’s a record that sounds equal parts nostalgic and fresh, due to the combination of quality production and Vox from Rongvald and Mokit, alongside the vocal stylings of lil orti trum, which wouldn’t sound out of place on a hyper pop record.  While I wouldn’t be the biggest fan of autotuned vocals in general, it works perfectly on this album, and if it wasn’t there it would lose some of the freshness.

I genuinely love every track on this and it’s already a stone cold classic. I really hope they play some gigs, as I want to dance like a maniac to it.

Celestial Navigation is available on all the main streaming platforms below.

This sounds very nice indeed. Ugandan Methods, the output of Regis and Ancient Methods, have a new release out. …

For the inaugural release on TILT, Faerber presents the 070717 EP, a four-track package of spiralling techno, which …