What with always being on the lookout for the unusual and emotive within the vast music spectrum I was delighted to get a chance to review the latest Múm album, released this Summer on Morr Music. Early Birds is a collection of Múm’s B-sides and unreleased tracks since the beginning of it all in 1997. (Streaming available at the end of the article)

For those of you who haven’t come across Múm on your musical expeditions, they’re an Icelandic band whose sound has evolved along the experimental side of things. Never being a band to be constrained by a certain fad or expectation, they’ve continued along their path while fusing their many influences along the way. Their use of sampling shows this from the beginning as original band members Gunnar Orn Tynes and Orvar Poreyjarson Smárason traveled through Europe recording anything they could get their recorders to. The process they went through in these early days really defined the sound Múm would later become known for, and this release is a great example of where it all began. Some areas they experimented with and took with them for albums such as Yesterday Was Dramatic- Today Is Ok and others left as a once off experimentation but captured on this Early Birds release.

The opening track Bak Þitt Er Sem Rennibraut is a perfect example of Múm’s flow between electronic and organic sound manipulation. Known for their ambient characteristics, it’s great to hear a few breaks being thrown in for good measure, all the while, the atmosphere prevails. The opening sample is intriguing from the get go and it brings reality and imagination to an epic touching point.

Continuing on to Póst Póstmaður there’s a coarseness in the production which layers well with the melody. An energy in the first few tracks develops the album well. But Glerbrot brings us back to evoking musical memories.

Their association with post-rock can be heard in Hvernig Á Að Særa Vini Sína. I’d imagine this track came together when the band began expanding during the 90’s. The album continues to do what Múm fans may be most familiar with, analogue melodic music, merging haunting atmospheres with playful samples and breakdowns.

The tenth track is where the Múm sound comes together, for me anyway. 0,000orð wouldn’t sound out of place on a movie soundtrack as the accordion and violin pieces would very nearly melt your soul. Lovely stuff (and it’s available for free download at the moment!). There’s a noticeable difference in the first and second half of the album. The energy has receded by the second half, to a point where it just spills over. Múm Spilar La La La is an example of this – it wouldn’t be out of place on a Summer’s day lazy jam in the garden.

There’s certainly a lot of inspiration to be gained from this release, especially when you put it in it’s place of a young band trying to find their footing and honing in on their style. It’s not a perfect album, but that’s part of the charm of it.

For Múm fans it’s a must. Showing insight into their practices and process, and the relaxed, ad-hoc vibe they played with as they found their footing. A peephole into the makings of an experimental band that will always be remembered, at least in my eyes, for pushing boundaries.

You can buy the album here:

And stream by clicking this image: 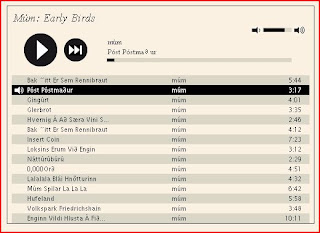 Happy Friday everyone! Hope you’re enjoying it where ever you are! Really looking forward to getting the weekend …

Having rinsed most of Kid Lib’s tunes and seen him play some ferocious gigs in recent years, I was delighted …